The basic sources for Slovenian ancestry are church registers back to the 17th century. Historically, Slovenia was part of the Austro-Hungarian Empire. In the early 1780s, Emperor Joseph II restructured the parishes, creating new parishes and moving some villages from one parish to another. He wished to limit the time required to get to the parish church and reduce the size of larger parishes. A tabular format for the registers was adopted in 1770 and modified in 1784. The earliest registers are Roman Catholic. Evangelical registers were mandated in 1782, Jewish in 1779, Orthodox in1864, Old Catholic in 1877, Baptist in1905, and Muslim in 1927. Transcripts (duplicate registers) for civil authorities were mandated in 1828. Early records are in Latin, later records until 1880 in German, and thereafter in Slovenian. In general, the parish or local civil registry office retain more current original records while duplicates are preserved in the respective archdiocesan or diocesan archive.

Another church source, primarily for the 19th century is status animarum, also found in ecclesiastical archives. The term status animarum translates as “the state of souls.” They contain names and information about baptism, marriage, burial, and relationship to head of household for everyone living in a parish and includes information on the house name (usually the Christian name of the person who built the house) by which the residents were sometimes known.

These records are found in ecclesiastical archives. The website Archdiocesan Archives Maribor may be more current that what is listed below. Some parish registers are still in the parishes.

Parish registers for western Slovenia are in Koper and in two Italian archives: Gorizia and Trieste. 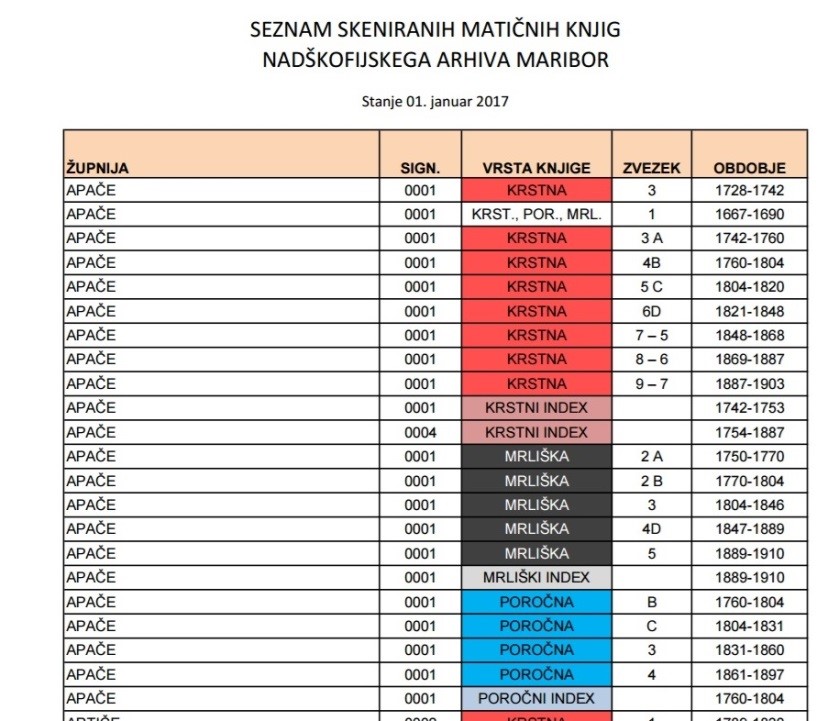 There are population censuses for Ljubljana, 1830-1931. In addition there are population registration cards, 1850-1941, that identify family groups with their vital statistics, filed alphabetically. These also exist for Maribor. These are

The Family History Library has approximately 1500 microfilm rolls containing civil registration for eastern Slovenia, population registration cards for Ljubljana and Maribor; census and conscription records for Ljubljana and vicinity; and German World War II filming of parish registers, land, and tax records. The images from the films can be accessed through the Family History Library catalog.

Military records available on microfilm are muster rolls (up to 1849), registers of military officers (1820-1918), general service records (1823-1918), and muster rolls indexes for officers and soldiers (1740-1820). A table of recruiting localities can be downloaded from the Internet. There are also a number of small-scale local military records (e.g. commissions, wills, payment books, court records, and more). To find those use the catalog of the Family History Library.