Sources for Jewish Genealogy in Russia 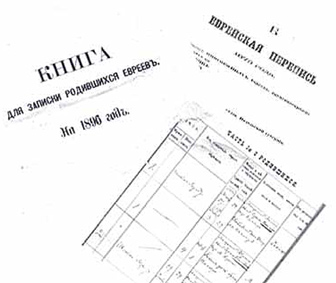 Blitz Information Center located in St. Petersburg and California has been providing research and genealogy searches in the archives of the Former Soviet Union. In fulfilling the assignments from our many clients Blitz has gained a wealth of experience in working with the archives and other institutions and has developed a knowledge of what information is available and where it can be found.

Blitz has provided many Jewish genealogy searches and has also researched Jewish subjects in the Russian Empire for a number of authors. The following is a description of some Russian sources of Jewish information that have been particularly productive.

Primary documents relating to Jews are held in regional archives. These records include Synagogue registers of births, marriages and deaths; family lists and materials of Jewish censuses; registers of draftee appointments; lists of landowners and other official filings. Many Archives located in the regions of the former Jewish pale (pre-1917) suffered much damage during World War II. Not all Archival collections survived. After the collapse of the USSR in the 1990s, the Archives of former provinces of the Russian Empire were suddenly in different countries: Russia, Ukraine, Belarus, Moldova, etc. Access to these files has become more difficult because of new Archive requirements and rules of the various new countries.

BLITZ can access some local Archives but works most often with sources available in the Central Archives as well as published sources in St. Petersburg. The main provincial newspapers (Provincial Records) contain information regarding court affairs and actions; lists of persons elected to city government and public positions in Jewish communities; lists of recruits; advertisements regarding auctions and lists of persons who acquired them; publications regarding incidents, events of cultural life, activity of Jewish charitable organizations, trade advertisements, etc.

Another good source are lists of recruits (draftees and those who avoided compulsory military service). Information about all young men of the appropriate age (21 years old) who were subjected to military service was regularly published in local newspapers. Sometimes lists of draftees contained some personal information about them and in some cases, about their parents.

Lists of persons who had a right to be electors to the State Duma were published in the central provincial newspapers during the election years of 1906, 1907 and 1912. Only taxpayers had the right to vote. However, all persons paid taxes for something, so it turned out that almost everyone in the entire province was included in such lists. These lists were compiled according to tax qualifications and it is possible to find out what kind of taxes the person paid, such as, property, apartment rental, handicraft duty, state service, etc. From this information, we can often guess a persons social status and occupation.

Very detailed trade directories were published in the Russian Empire prior to 1917. For example: yearly issues of the address-calendar of the Russian Empire - "All Russia" directory; All South-Western Region; the provincial and city publications. BLITZ uses such publications during the preliminary search and finds these sources particularly useful in obtaining information about members of families their names and patronymics, businesses and addresses.

Working with the Russian State Historic Archives located in St. Petersburg may also provide positive results. Fond 821 contains a collection of documents of the Department of Sacred Affairs for Foreign Religions. Inventories to this Fond list a number of files with documents on the Judaic religion and persons of this faith. These materials include lists of synagogues, prayer houses, rabbis and other clergy in various provinces of the Russian Empire.

Also interesting are individual files of this Fond which concern claims from various persons in a particular province regarding government refusal to open synagogues, prayer houses and cemeteries or closing those which existed before; claims for abuses of rabbis and members of religious administrations. There are documents concerning elections, and some position confirmations. The significance of these files lies in the fact that they include petitions sent on behalf of Jewish communities and contain the signatures of almost all members.

Fond 1292 contains files concerning the recruitment by draft offices of the entire Empire. Fond 1284 contains files concerning property ownership including land plots in different provinces of the Russian Empire. Documents concerning Jews may be found in this Fond. Fond 20 contains documents of the Department of Trade and Manufacturing of the Ministry of Finance including inquiries of owners and renters of companies or even stores located in various provinces. Fond 18 contains many files of the Department of Manufacturing of Interior Trade with lists of local merchants. As a rule, not only the merchants are listed but also members of their families as well. An example of this information is illustrated by the following entry:

Kuna, Mot Shamovich. Wife, Freida. One son. Trade of different goods. Merchant of the 3rd guild in the city of Mogilev (Podolia province).

From the entry above, we are able to learn names, family composition and business for a specific year. This information is useful in selecting the sources and directories for additional research.

Below is a list of surnames of merchants of the cities and districts of Mogilev and Jampol, both in the Podolia province, as listed in documents of such files (Russian State Historic Archive - Fond 18). If you are interested in more information from a surname listed below, please apply to Blitz (see contact information below).

We recommend research in the Russian State Historic Archive in St. Petersburg not be delayed. To our great sorrow we were informed that the Russian State Historic Archive will soon be closed for a long time. Although there is no exact date yet, the archive is expected to close sometime in 2004. The building now housing the archive was the Ruling Senate and the Holy Synod before the Revolution. They are now being returned to the Government. The length of closure will depend upon the readiness of the new building being constructed for the Archive. The new building will be NorthEast of the city off the Ladozhskaia metro station. The documents will be packed, then moved and organized. There are about seven million files and this process will take a long time. So, the documents will not be accessible either for researchers or anyone for many years. The Central Archive of the Russian Empire is still open and can be accessed for genealogy research.

BLITZ has had good results researching Jewish families in another archive located in Moscow, the State Archive of the Russian Federation, which contains a large number of documents in Fonds of Police and Gendarme Administrations. Many Jews participated in revolutionary activities, were members of different parties and non-legal societies in the late 19th-early 20th centuries. Such persons were under supervision or trial and it is possible to obtain rather complete information about their origin and family composition from the personal files and other documents available in this Archive.

Unlike genealogy research in Western countries, in Russia it is usually not possible to immediately focus on obtaining a birth certificate or death certificate. In most cases, such certificates simply do not exist or there is insufficient information as to location, date, even names to know where to start looking.

Blitz begins its research with a preliminary search which uses readily available sources such as the All Russian directory as well as other sources to see if the family can be found. Once mention of the family is found, the research can become more focused. This type of research often yields a more detailed outline of the family history, rather than just names and dates of births, marriages and deaths.

For more information about Blitz or would like to undertake a search, please contact Kristin Nute enute@igc.org or Elena Tsvetkova rublitz@gmail.com.